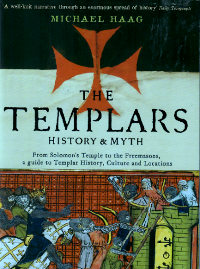 Something totally different this month. This one is for your winter “bedtime” reading and has little to do with Anglo Saxon times, although a lot was going on in the Middle East at that point in history.

Michael Haag, unknown to me until I found this book, is a writer, historian and biographer. He has written widely on the Egyptian, Classical and Medieval worlds; and on the Mediterranean and the Middle East.

And his blog at: http://michaelhaag.blogspot.com

To quote the book’s fly leaf:-

“This is the first history of the Templars since the sensational discovery in the Vatican Secret Archives of the Chinon parchment that clears them of heresy. An order of warrior monks founded after the First Crusade to protect pilgrims to Jerusalem, the Templars developed into one of the wealthiest and most powerful bodies in the medieval world. Yet two centuries later, the Knights were suddenly arrested and accused of blasphemy, heresy and orgies, their order was abolished, and their leaders burnt at the stake. The dramatic end of the Templars shocked their contemporaries and has gripped peoples' imaginations ever since. This new book covers the whole swathe of Templar myth and history, from its origins in the mysteries of Solomon's Temple in Jerusalem through to the nineteenth century development of the Freemasons. The book also features a guide to Templar castles and sites, and coverage of the Templars in books, movies and popular culture”.

Enjoy the read. It may take you a while!.