Brethren, whilst there are signs that the Covid-19 pandemic is still in our midst, Freemasonry is gradually coming back to life again. However, we must still be careful and look after ourselves, our family, and our fellow man.
A lot has happened in the six months or so since I last posted my Blog. I will therefore try to encapsulate what has gone on during the intervening period of time.

The Order was suspended until 1st September 2021, but that did not stop us from keeping in touch with each other. Our Almoners did a great job checking on the Brethren and reporting back accordingly, particularly at the Zoom meeting on a Friday afternoon, hosted by VW Bro Karl Debenham, our Provincial Grand Almoner, to whom we owe a great deal of gratitude for keeping us amused during these dark days. Other Zoom meetings were held by various Courts, but one particular became a “must attend” meeting. I, of course refer to the Court of Herbert de Losigna No 31 meeting, which progressed from an informal chat meeting into somewhat of a weekly “Study Circle” event, where it was my responsibility to challenge the members to research various historical topics. The response was exceptional, and many potential short “Papers” were produced.

When the pandemic was abating, and we had some confidence in meeting up again, Brother Stephen Teverson arranged for the members of Court No 31 and friends to visit W. Bro. Gordon Easton’s agricultural museum, at Engine Farm, on the 4th August. The sun shone, and we had a wonderful day out culminating in a lovely picnic together. Gordon regaled us with many stories of yesteryear in the Fens. It was a very uplifting experience.

During the suspension period, sadly three Brethren from the Province passed to the Grand Court above:

Brother Martins Ogunbiyi was the only  member of our Province that died as a result of Covid-19. He was a gentle giant of a man and will be sadly missed.

On the 3rd September, the King Athelstan Tapestry was unveiled at All Saints Church, Kingston upon Thames, where of course King Athelstan was crowned. A video of this occasion is on the Order’s main web site. If you haven’t already seen it, please take a look.

On the 4th September, the first Court meeting back was the Court of Aelfred No 2, where we had around 30 members present to witness two new “Instructees” join our Order, namely Bro. Marc Beveridge and Bro. Andrew Swift. 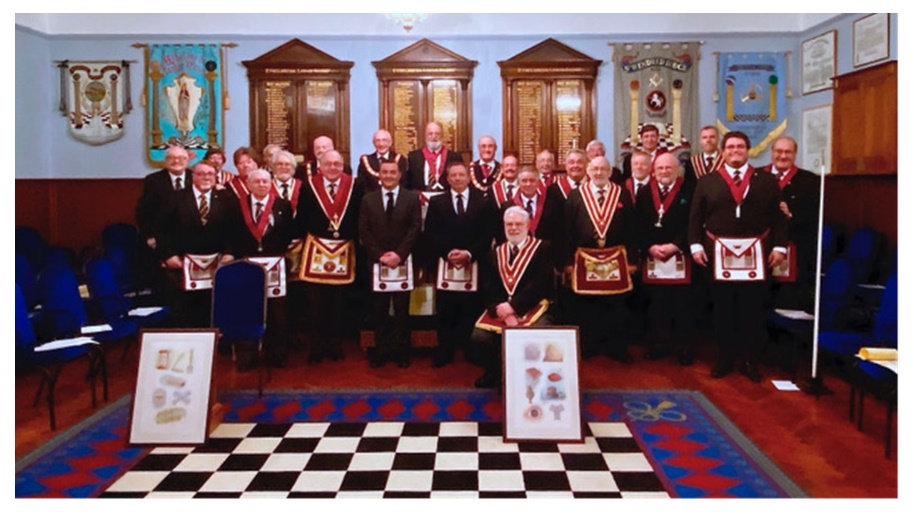 On the 25th September Provincial Grand Court was held at Bury St Edmunds, and whilst numbers were down on our last meeting two years ago, we still had a good turnout with around fifty Brethren being present.

The highlight of the year so far, was of course the Grand Court weekend, in Leicester, 29-30 October, when at long last the Court of Keith Ansell at Grantebrycge No 150 was consecrated. My thanks go out to all who participated in that ceremony. The Court has 46 founder members, 22 of which are new “Instructees”, which is exceptional. The representative candidate was none other than our own Provincial Grand Master in the Craft – Bill Dastur. His support to this Order in recent years has been exceptional and much appreciated. 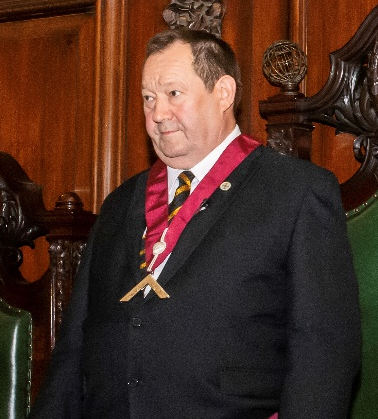 Later that day W. Bros. Bharat Khetani, John Clarke, Reg Eaton, Terry Lewis, David Parry, Mark Shields, Brian Thrower and Roy Winfield-Lowe were all admitted to the Ancient Masonic Order of Alfred the Great, joining W. Bros. Ian Fawcett, John Grevatt and Nigel Williams, who were admitted in a ceremony at York two weeks earlier. Their preferment is marked by their entitlement to use the post-nominal initials 'KAG' within our Order.

The previous day I was delighted to be admitted to the grade of Knight Grand Cross of the Ancient Masonic Order of Alfred the Great (GCAG), an honour that I had not remotely expected.

The highlight of the weekend was of course the Grand Court meeting itself, where around 200 members attended.

The Province and this Court in particular was honoured with more Grand Ranks than most Provinces, with the following Promotions and First Appointments namely: -

Finally Brother Colin Jackson was named and presented as this year’s winner of the prestigious “Chevalier Ramsey Lecture Award”. Another well deserved award, and we look forward to Colin presenting his paper across the Province and the Order in due course.

A delightful surprise on the previous day was the promotion by the MW Grand Master of W. Bro. Bill Dastur to Past Grand Sword Bearer, affording him the honorific of “VW Bro” and reflecting his position in the Craft and his outstanding support for this Order.

All in all, it was a very successful weekend for the Province of East Anglia. I am proud of all the members of this Province who have contributed to making this such an outstanding event.

Your Provincial Grand Secretary Worshipful Brother Eddie Moore continues to update all members of any important communications from Grand Court, so I will not repeat them here. Eddie has also updated the Provincial Yearbook and it is available for downloading on the Provincial Website. For those who have not yet seen the Grand Master’s latest presentation on the Order’s YouTube channel or main website, please do so, as it is well worth watching.
In the meantime, please look after yourselves, and your families, and I will be in touch again in due course.

Yours sincerely and fraternally